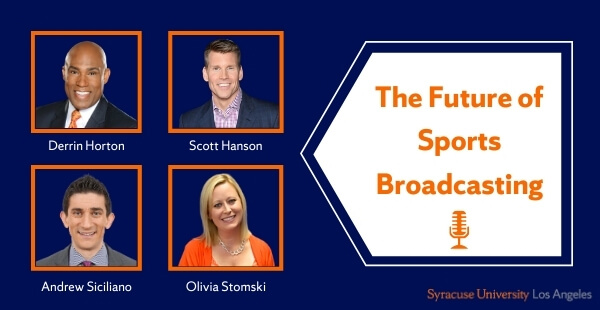 ‘97 Andrew Siciliano, ‘93 Scott Hanson and ‘91 Derrin Horton all joined Newhouse students and faculty on a zoom call to discuss the future of sports broadcasting. The event was hosted by the director of the Newhouse Sports Media Center, Olivia Stomski.

Journalists enter an ever-changing industry. They must be able to adapt to the latest trends and changes. Storytelling will never look the same in a uniform sense throughout history, it will always change, adapt and thus improve. Perhaps the global pandemic has taught us no greater lesson than the importance of the ability to adapt. Scott Hanson, 1993 graduate of Syracuse University and host of NFL RedZone, adjusted to giving viewers’ their commercial-free Sundays in a socially-distanced fashion.

“We went from people in a control room being shoulder to shoulder to having technical directors down the hall in different rooms,” Hanson said. “That being said, I defy anyone to see a great difference in our broadcast between 2019 and 2020. That is a true testament to our team and the work we have put in.”

Derrin Horton, Sports Anchor, felt that there was an adjustment to storytelling in a positive way.

“Zoom allowed us more access to contact teams, coaches and players,” Horton said. “In the early stages of the pandemic back in March, we had to shift to more of a sports news operation, filling in all the details of all things covid.”

“No one cared what it looked like,” said Siciliano. “I don’t think we will ever go back; production value is dead. Before COVID, the only way we would get someone on the air through FaceTime was if it was an emergency, but now nobody cares.”

More audiences are getting used to consuming content on their smart phones, so seeing someone, especially a high-profile athlete, interviewing through their own smart phone adds a sense of connection to the viewer.

Scott Hanson has been to 14-straight Super bowls, usually serving as the host in stadium when the broadcast cuts to commercial break, Hanson appears on the jumbotron at the stadium to entertain the fans present. This year’s Super Bowl was different in a lot of ways Hanson educated the Zoom call on.

“The Pandemic did not move the Super Bowl,” Hanson said. “However, I hope it never has to be this way again because the Super Bowl is more than just a three-to-four-hour football game with an extended half time show. It is an entire week of events and the week and the broadcasting were not the same due to the pandemic.”

“The great thing about Zoom is that you get to see inside homes,” Siciliano said. “Every interview, every time you turn the television on is like an episode of sports cribs. We want to maintain these positives moving forward.”

Siciliano mentioned the utmost praise he had for broadcasters during this past NFL season as they were able to convey the energy as if the stadiums were normally filled. “Being there with no fans, it was a weird experience. You could not tell the emptiness of the stadiums through the broadcasts though, so kudos to them this season.”

The effects of the pandemic and social distancing varied across the different sports leagues, according to the panel.

“It was weirder in the NBA because you can see the empty rows of seats in the wide shot,” said Horton. “The winning percentage of the home team also had a big drop off. I believe at one point the Lakers were 4-4 at home but 10-0 on the road.”

Without a doubt, athletes are placed on a pedestal in our society. The panel had a lot to say about how social justice was covered in athletics.

“We should respect when an athlete wants to talk about social justice without bias,” said Hanson. “This is what makes me even more thankful for my background at Syracuse because we were trained as classical journalists. To report the facts and articulate ourselves to be as fair and equitable as we want our society to be.”

Siciliano dated back to the protests in May to provide the facts that sports and society are one of the same.

“I believe it taught us that athletes are just like us. They pay taxes, they send their kids to the same schools, so the challenge is to tell stories reminding our viewers we are all in this together.

The panel left students with wise words of wisdom.

Scott Hanson – “If you want it bad enough, sacrifice what others will not. This is a weed-out industry.”

Derrin Horton – “You are in this industry at a great time. There are more opportunities than ever. You do not have to go to a smal town to make it.”

Andrew Siciliano – “Do not go into this industry just knowing sports. Be versatile, be able to tell news from sports and be able to tell the different types of stories.”