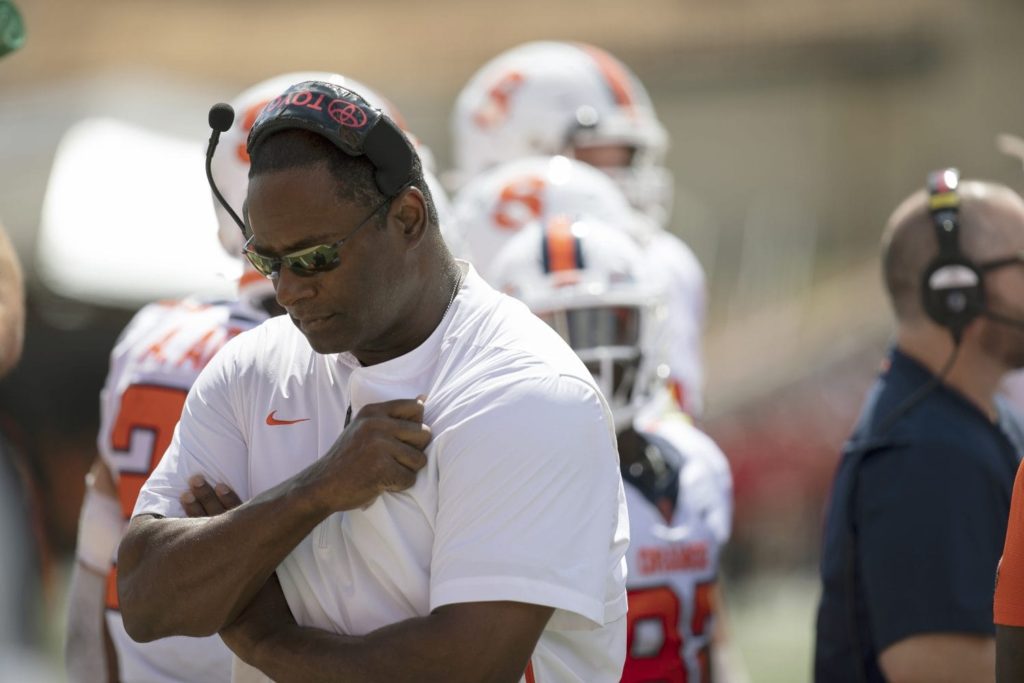 Orange Offense Too Slow for BC

SYRACUSE, N.Y.— The Syracuse Orange faced off against the Boston College Eagles for the 54th time in series history in the Dome on Saturday, Nov. 7. The Eagles came into the game following a strong performance against Clemson last week where they nearly knocked off the number one team in the country.  Meanwhile, the Orange came in having a notably tough season, holding a 1-6 record in a season plagued with injuries.

The game started off with an unfamiliar face at quarterback. Rex Culpepper was not in the game due to an injury, leaving it up to true freshman JaCobian Morgan.

From the start, there were offensive issues for both teams. Boston College quarterback Phil Jurkovec missed some important throws that left the first quarter scoreless. The Eagles began to pick up ground when a Jurkovec pass connected with Zay Flowers at the 40-yard line for a 39-yard play. The Eagles could not score a touchdown as redshirt freshman Garret Williams proved his cornerback chops with a nice stop on Flowers. BC settled for a 33-yard field goal, taking the lead 3-0 at the end of the first quarter.

In the second quarter, the Orange offense ramped up the energy. Morgan found junior receiver Taj Harris for a 26-yard completion. The Orange settled for a field goal, bringing in redshirt junior kicker Andre Szmyt for a 35-yard field goal to bring the game to a tie at 3 points apiece.

Despite the renewed energy, Syracuse was unable to come through with any more scoring in the first half. The Eagles ended the first half with a touchdown, bringing the score to 10-3.

At the start of the second half, BC was quick to move the ball to the red zone. The Eagles missed a 39-yard field goal to keep it a one score game.

The Orange cut their deficit to 10-6 after a 36-yard field goal.

It was a true defensive battle with 15 minutes left to play. Syracuse forced a fourth down and the Eagles increased their lead to 13-6 with another field goal. The Orange offense struggled to move the ball as Morgan was smothered in the backfield and sacked on consecutive plays.

Then Morgan threw a pass which was intercepted by Jason Maitre of Boston College for the first turnover of the game. The turnover led to a first and goal for Boston College. The Orange red zone defense proved strong as it forced a BC field goal, increasing the Eagles’ lead to 16-6.

The Orange offense started to move the ball in the final minute of the game. Morgan connected on a long pass to Harris deep in BC territory. With 27 seconds left on the clock, Morgan almost rushed in for a touchdown, but was just shy at the one-yard line. Syracuse scored a touchdown on the next play, bringing the game to a close 16-13.  However, it was not enough for the Orange to come out with the win.

In the post-game press conference Head Coach Dino Babers said he was happy with the defense but said he needs to see his offense run the ball better. “If you’re going to win those types of games, then you can’t have the penalties. You can’t have the turnovers,” commented Coach Babers.

Moving forward, Babers said they will bring in Morgan as the quarterback if Culpepper is still out. “I think he had a lot of confidence. He just doesn’t talk that much. So he’s a listener,” said Babers.

Up next for the Orange is traveling to Louisville to take on the Cardinals on Friday, November 20 following the Syracuse bye week.