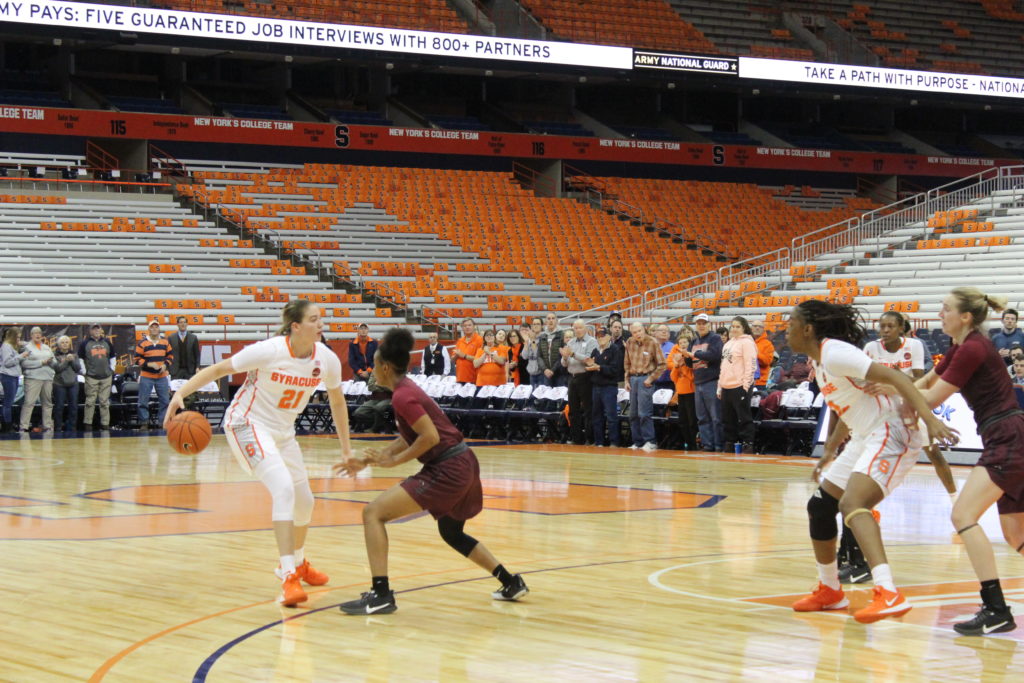 “We just want to continue to progress, play hard, and try to get starting rotations in the game, and play clean basketball,” said coach Quentin Hillsman after the game. “So far, so good.”

The Orange had to dig themselves out of a 10-2 deficit early but found themselves in the lead 14-13 at the end of the quarter. The turning point in the streak was thanks to Syracuse’s guard.

Junior Kiara Lewis intercepted a pass and ran it three quarters of the way down the court for the go-ahead layup midway through the first quarter. The second quarter was where ‘Cuse really separated themselves. Solid shooting outside and bruising inside the paint led to a 29-20 tally at the end of the second quarter.

The heavy lifting in the first half was done in large part thanks to sophomore Emily Engstler. The 6’1” guard put up 11 points and 6 rebounds in the first half, carrying the bulk of the Orange’s scoring for the first 20 minutes, and ending the half on an emphatic block.

Another strong part of the half was Syracuse’s outside shooting. Of the Orange’s 10 baskets, 7 came from beyond the arc, three of them from Engstler.

“I think it’s just about confidence,” Engstler said. “When you have some, it makes the game a lot easier. You make a couple shots, you’re not afraid to shoot the ball.”

Hillsman noted that his starting sophomore was able to buy time for the rest of the offense to find its footing.

“She was very aggressive in the game, that was the big thing,” Hillsman said. “I want to continue to see her play hard and get down the floor. I thought she put her head down and went to the bucket when should could have taken the three, but she’s shooting the ball well. She’s got to continue to be aggressive and take what the defense is giving her.”

The third quarter was a continuation of the same. Syracuse leapt out to a 38-22 lead in the first four minutes of the quarter, in part thanks to the shooting of senior guard Gabrielle Cooper. The Orange never looked back, finishing the third stanza 46-29.

The final quarter was the only quarter where the Maryland Eastern Shore Hawks scored more than Syracuse, 21-19 in this frame, but it was too little too late. Syracuse finished out the game 65-50 to move to 2-0 on the season.

“I figured we were moving the ball well, we were playing off of what they were giving us,” Cooper said.

It was a big night not only for Engstler, who finished with 15 points, but also for Cooper and junior forward Digna Strautmane. Cooper finished the game with 11 points, 7 rebounds, and 3 steals. Strautmane had 17 total points, including 5-of-9 from beyond. There were 37 shots from beyond the arc for Syracuse during the game.

“Coach just told me to shoot more, so I was shooting,” Strautmane said.

20thranked Syracuse will move on to face off against the Albany Great Danes (1-2) on Saturday, Nov. 16. After that, they face the No. 1 ranked team in the country when they host the University of Oregon (2-0) on Saturday, Nov. 24. 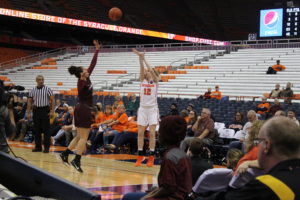 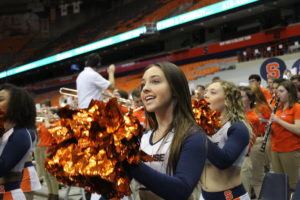 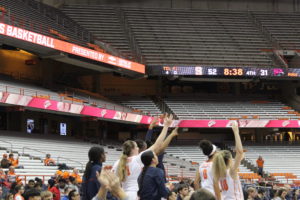 The team celebrating a three-pointer. 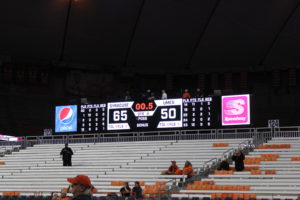 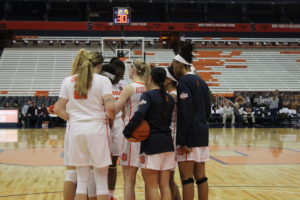 The team in a huddle, before the game.