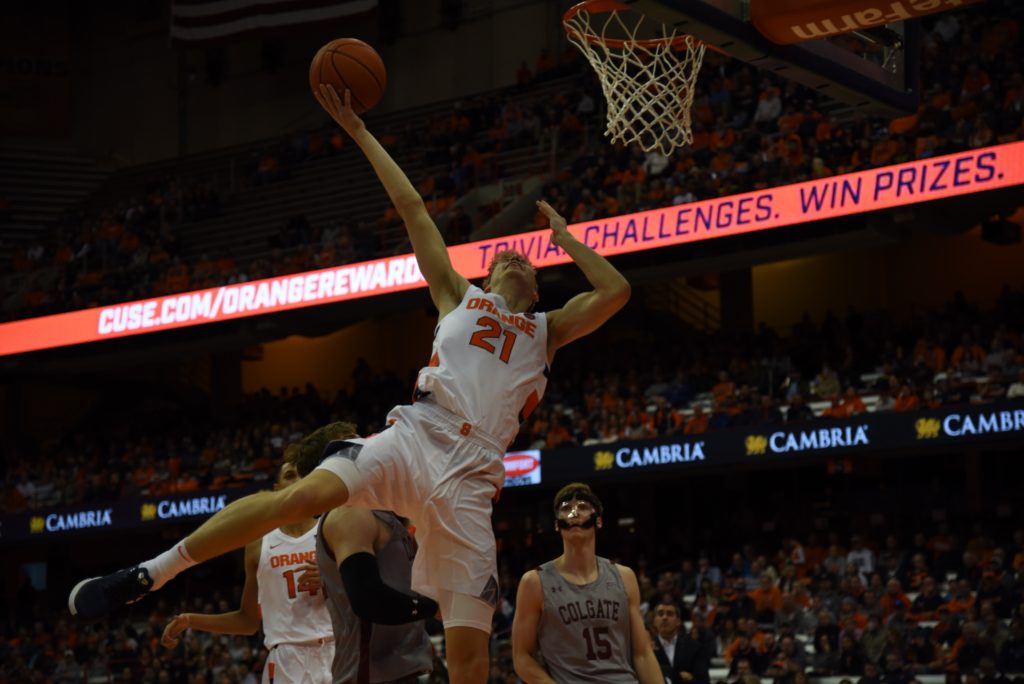 SYRACUSE, N.Y. – The Syracuse Orange defeated the Colgate Raiders by a score of 70-54 on Wednesday evening at the Carrier Dome. Syracuse got their first win of the season behind strong performances by Buddy Boeheim (17 points., 6 assists) and Elijah Hughes (14 points., 8 assists).

The Raiders had an early 9-1 lead behind three pointers from Tucker Richardson, Will Rayman, and Jack Ferguson. Syracuse shook off their slow start behind back-to-back threes from Buddy Boeheim, tying the game at 11 points, about nine minutes in.

For the rest of the half, Syracuse repeatedly built a small lead, only to let Colgate trim it or tie the game. Elijah Hughes played a big role in the offensive outburst on Syracuse’s end. He didn’t get his first bucket until 7:28 left in the half but found a stride and went into halftime with 7 points.

In the second half, it was all Orange. Marek Dolezaj got the half started with a lay-up and a spin move, followed by a thunderous dunk the next time down the floor. Joe Girard III hit a three soon after, and the hit Bourama Sidibe for an alley-oop right after.

With 7:33 left to play, the Orange had their biggest lead at 58-34. From there, the Raiders made a nice offensive push, but it was too little too late and the Orange prevailed.

Notably, after the game, Coach Jim Boeheim said that Girard would be taking over for Jalen Carey at starting point guard on Saturday night, against the Seattle Redhawks. Though his stats didn’t jump off the sheet, Boeheim said he thought Girard played good defense, stabilizing the offense.

The Raiders lived and died by the three and SU made sure it wasn’t going to be the former. They held Colgate to 31.7% from behind the arc. They also only allowed the Raiders to shoot seven free throws the entire game.

Boeheim was happy with the defense but said the offense still needs work. “You got four new guys who have got a lot of work to do to get fit together and we need game experience,” he said.
He then mentioned that he needs to get a group that gets used to playing with each other, as you cannot have consistency with 9 or 10 guys playing significant minutes.

Boeheim was also happy that Buddy was being more aggressive. “We got more rebounds because he was penetrating,” he said. He also added that freshman John Bol Ajak will redshirt this season. 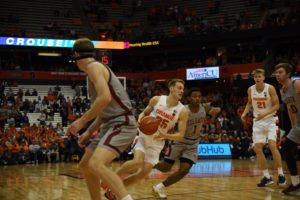 Buddy Boeheim, with the ball.

Roars cold be heard from the spatters of Colgate fans around the Carrier Dome. With Colgate only being approximately 40 miles down the road, it was expected that Syracuse’s fellow Upstate neighbor was going to have a presence.

The Syracuse student section, Otto’s Army, released a statement before the game encouraging students not to attend as a protest in light of how they felt the university handled recent hate crimes on campus, making for a nearly empty student section.

The Orange will be back at the Carrier Dome this Saturday to take on the Seattle Redhawks at 7PM on the ACC Network.