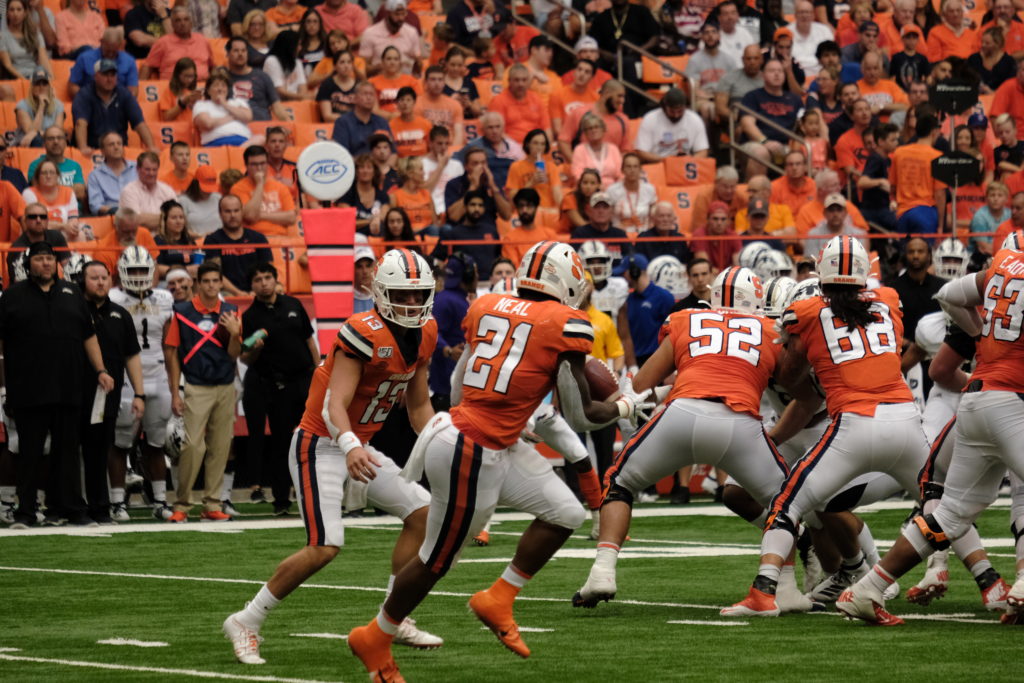 Orange get spark back after defeating Western Michigan

SYRACUSE, N.Y. – It was a much-needed win for Syracuse as the Orange defeated Western Michigan 55-42 after a crushing loss to Clemson (41-6) at home the previous weekend. The Orange’s running game dominated the first quarter with a 60-yard rush by quarterback Tommy DeVito placing Syracuse in the red zone on the second play of the game. SU’s star running back, Moe Neal, completed the drive, rushing into the endzone scoring the Orange’s first touchdown only 1:30 into the first quarter.
Later in the quarter, WMU loses their star receiver, Dwayne Eskridge after suffering a collar bone injury when colliding with defense on a deep pass. The Broncos were forced to rearrange their offensive strategy, while SU managed to score another TD with 5:29 left in the quarter.
The Orange’s defense only allowed one 4th down conversion of five attempts. The offense remained unstoppable in the second quarter with a 36-yard TD by DeVito on the first drive of the 2nd quarter, putting SU ahead 21-0.
As the Broncos began to utilize their star running back, Levante Bellamy, he finally put points on the board for the away team with nine minutes left in the 2nd quarter. Bellamy was later sidelined in the 3rd quarter with an injury.
With two offensive juggernauts out of the game, the Bronco’s offense took a big hit while DeVito made magic with Trishton Jackson (WR) and Aaron Hackett (TE) in the final half connecting with both players six times for 189 yards and 4 touchdowns. Jackson was named ACC receiver of the week for his performance in Saturday’s game.
“I thought that they were extremely focused, and maybe even a little embarrassed about some of the things that had happened recently,” said Orange Head Coach, Dino Babers. “They thought about the Orange in front of their chest and not their names on the back.” He said about the offensive spark that carried the team this week.
SU’s record is even again, at 2-2 going into their match up with Holy Cross on Saturday.