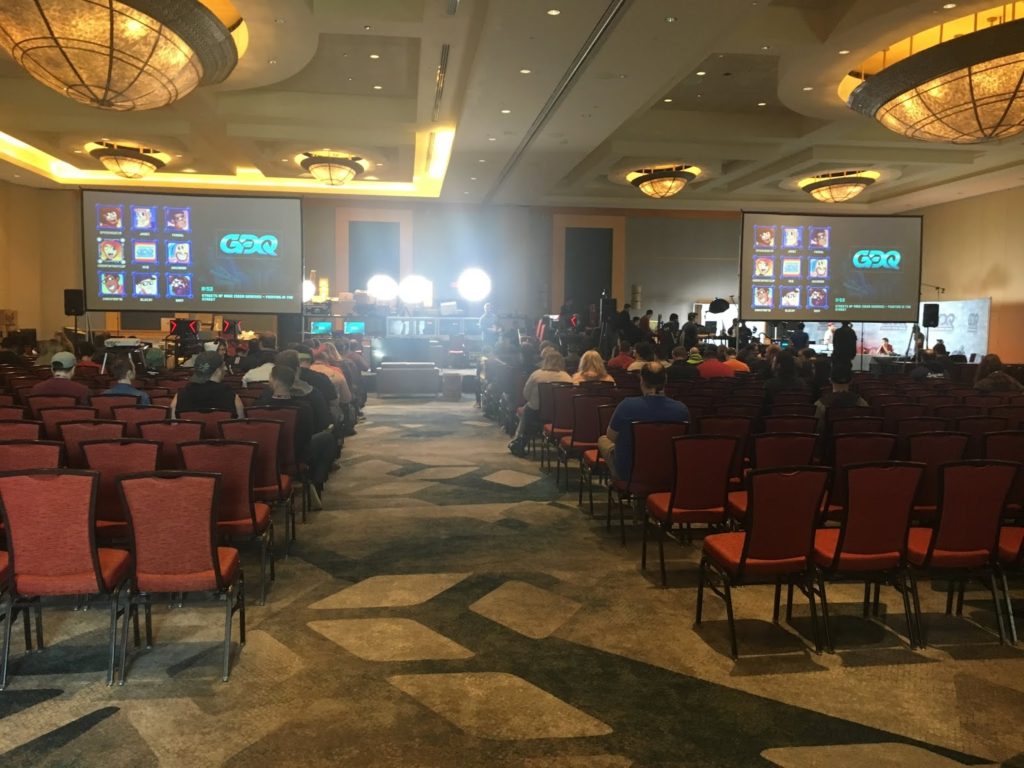 Photo and Story by Keir Chapman

Awesome Games Done Quick (AGDQ) 2019 has drawn thousands of attendees, but they are not the only one’s taking in the event. More than 100,000 viewers who couldn’t be there in person, have flocked to twitch.tv/gamesdonequick to watch every single game. AGDQ’s production team works endlessly to ensure the stream goes on without a hitch.

Next to the main stage sits a platform with a multitude of screens. This is where production resides. The crew members assume many of the same roles one finds at traditional sporting events. A producer runs the show; an audio technician ensures everything sounds crystal clear, and a video technician takes the live video feed and broadcasts it to Twitch.

According to Aharon Turpie, AGDQ’s technical director, the audio technician’s job is particularly difficult to train for. The audio technician is responsible for mixing game audio, the hosts’ audio, and audio from the players’ and commentators’ headsets. The ever-increasing audio elements are putting a strain on AGDQ’s existing soundboard.

“We were like, ‘Oh, we’ll get this digital mixer with 32 inputs and 16 outputs. We’ll never need to update this mixer again,’” Turpie said. “In two events, we maxed it out.”

This epitomizes the ever-changing nature of Games Done Quick’s (GDQ) production setup. Turpie joined the team at a time when there was just a single camera and no interview stage. Today, there are seven cameras, four of which reside on the stage-show set.

The addition of a stage show that plays in between runs has created a new production team, completely independent of the crew that works on the gaming stage. By having an independent production setup, the stage shows can prep while games are going on, making transitions to interviews seamless.

The stage show utilizes a four-camera setup, and each camera takes different shots. When live, the producer makes the call for what shot to take next. The fourth camera is centered on a second, smaller set, used for announcing donation prizes. The latest camera is an addition everyone on the GDQ staff supports. The second set, not so much.

“They found that, overall, the second smaller set didn’t play very well with the natural flow of their skits,” Turpie said. “They like four cameras, but maybe for one set.”

Speed running inherently creates a production problem. The genre features a wide variety of games, some of which are played on analog consoles like the Super Nintendo Entertainment System, and Atari.

To combat this challenge, the GDQ staff uses an open source scan converter (OSSC), which takes analog video, and converts it into HD quality. The OSSC does so with very little latency, allowing GDQ to stream old-school games to Twitch without any problems.

Another issue GDQ production faces is a small staff. A low budget means there are fewer hands to help out. There is a dashboard for video technicians, which contains a checklist of things needed to be done before each stream. The checklist also lets other team members know what has been accomplished, cutting down on needless communication.

AGDQ also uses a server produced by Support Class, called NodeCG. According to Turpie, this server takes in and manages all of the information the technical team uses. With this information, the server creates an automated system that ensures everyone knows what they need to know.

“It offloads a lot of work from the producer,” Turpie said.

Because the GDQ production staff is so small, they try to nip any potential problems in the bud. This includes meeting with runners before they are scheduled to go on and working through every possible thing that can go wrong during the  stream.

Even with contingency plans in place, unexpected errors do occur. When that happens, there is a chain of command that goes into effect, with Turpie’s generally being the team member most turn to when the problem is too large. A rung beneath him in the technical ladder sit the producers. Although they usually aren’t technicians, Turpie said they are often able to take care of the problem without involving him.

As GDQ continues to grow, the demands on the production team grows alongside it. The crew uses every event to determine what can be changed in the future, so they are ready to meet new challenges created by a larger fanbase.

“We observe where there are problems, delays, and things that our crew and volunteers have trouble following,” Turpie said. “We find ways to not only increase production value, but to also improve the setup complexity, so people can go from run to run as quickly as possible.”

From the gamers to the production staff, it appears everything about GDQ is about accomplishing a task as quick and seamlessly as possible.