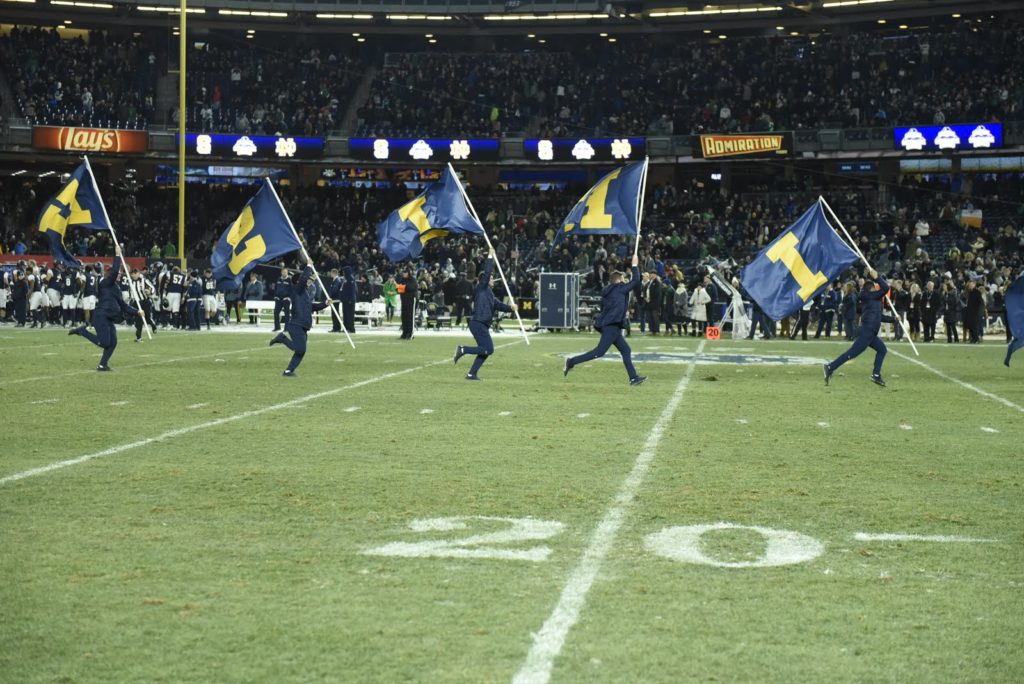 BRONX, N.Y. – Once dubbed “New York’s College team” on signs in Yankee Stadium, Syracuse couldn’t have felt less at home on Saturday afternoon. This time, the end zones read, “Notre Dame” in a Yankees style script, the Irish’s logo was on both 20 yard lines, and Notre Dame players had pinstripe pants on. Justin Tuck, a Super Bowl champion and Notre Dame alum, came onto the big screen at the start of the game to a roar from the sellout crowd, which mainly consisted of fans in green and gold. The small percentage of the 48,104 that were draped in Orange made up most of the left field section of the Stadium, and by the middle of the 4th quarter, most had filed out. 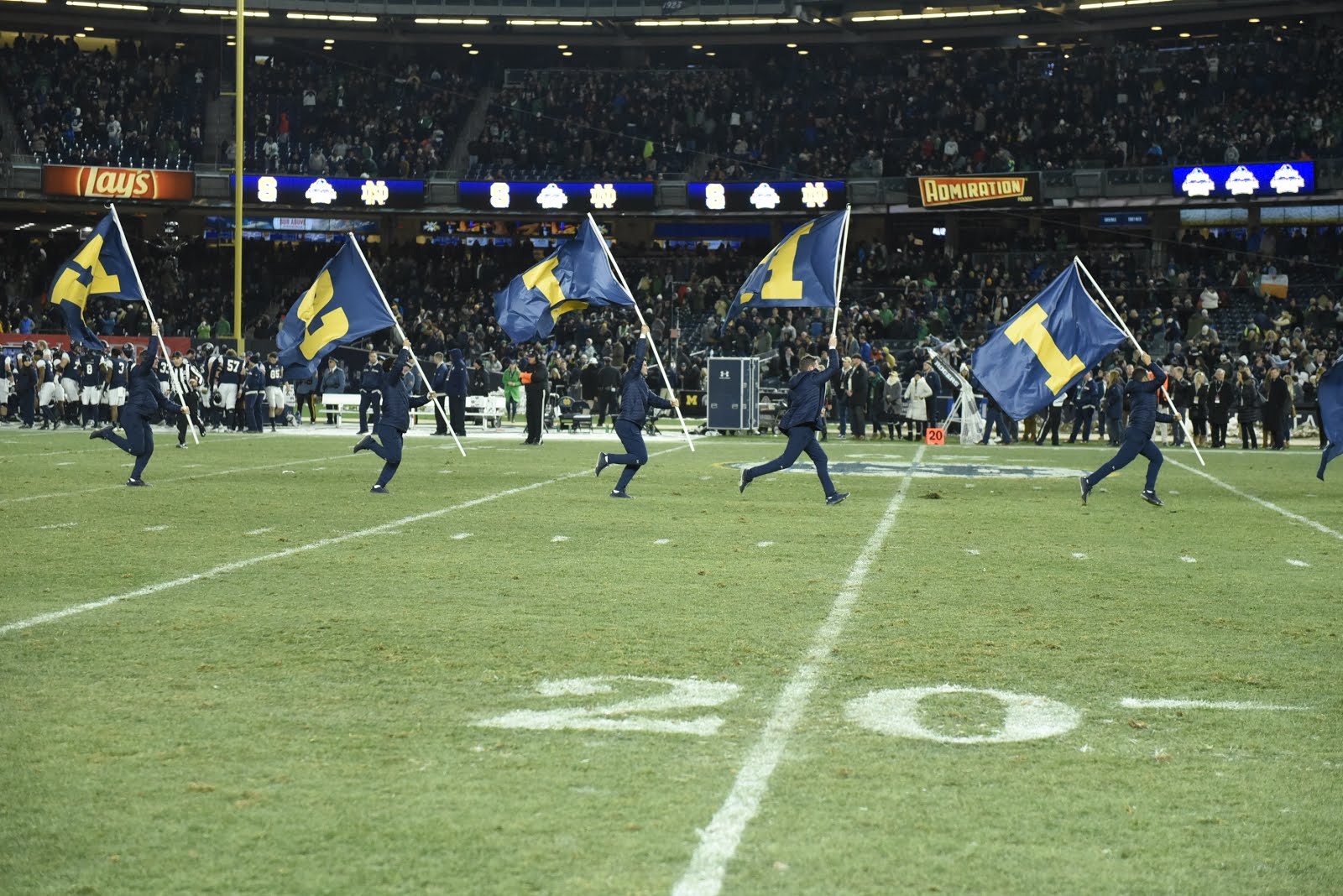 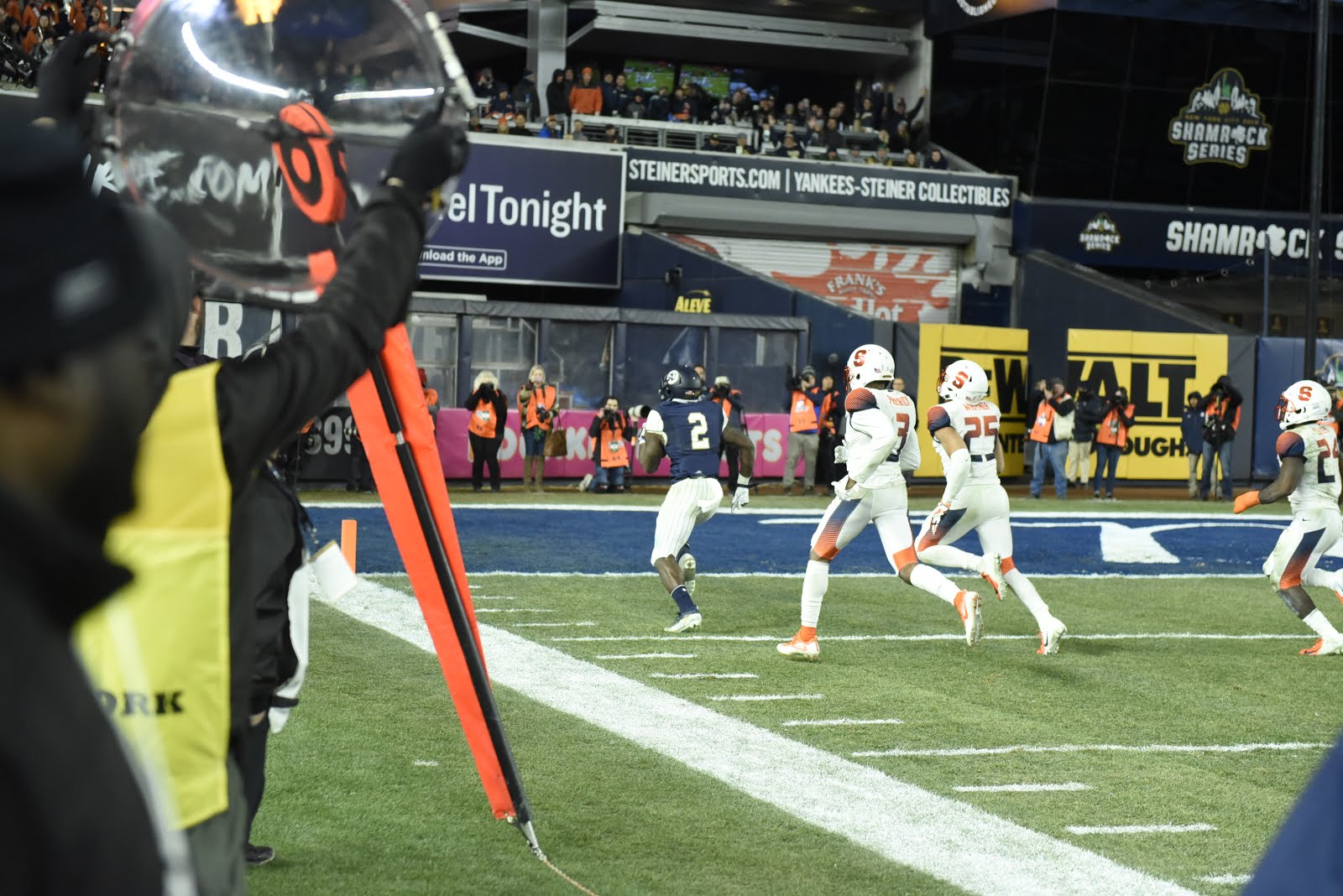 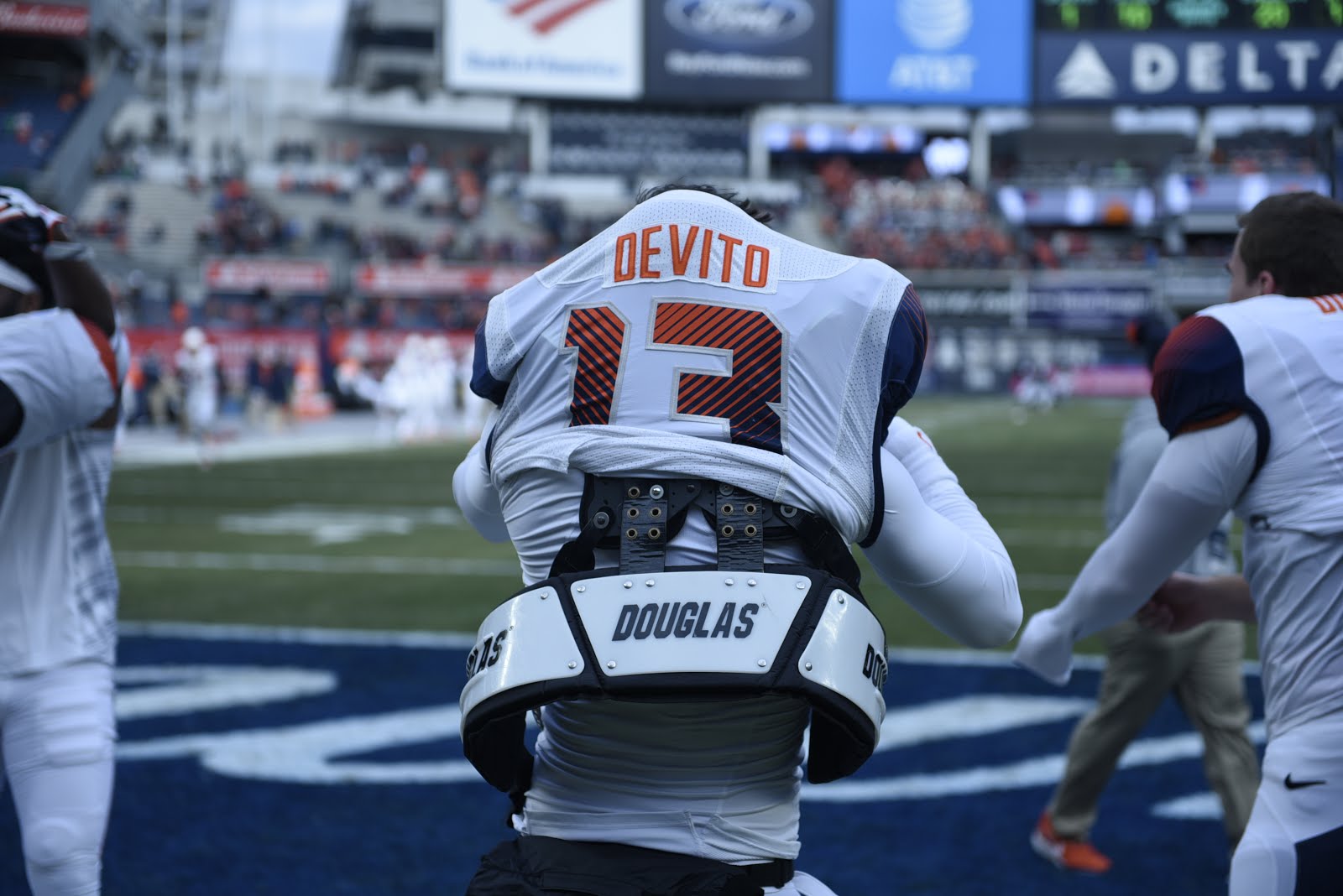 Dreams of a New Year’s Six Bowl game were squashed for the Syracuse Orange on national television. In fact, by the end of the first quarter, things were already looking grim. After winning the toss and going three-and-out on their first possession, it didn’t take long for Ian Book and the Irish offense to find their tempo. Book, the junior quarterback, lead a 55 yard drive down the field that ended with a Dexter Williams touchdown for the first score of the game. With a chance for Syracuse to answer, Eric Dungey was intercepted by Notre Dame Safety Jalen Elliot when looking for Taj Harris over the middle. Just like that, Notre Dame held a 10-0 lead 8 minutes into the contest. However, that would prove to be the least of the Orange’s problems.

On the ensuing possession, senior quarterback Eric Dungey rushed up the middle for a gain of four yards. He popped up and as he was getting ready for the next play, Dungey grabbed his back and fell over in pain. For several minutes the medical staff tended to him and eventually helped him off the field, which meant the New Jersey native Tommy DeVito’s number would be called on yet again. No stranger to coming off the bench, Head Coach Dino Babers didn’t hesitate to draw up a play. DeVito launched a 42-yard strike to Nykiem Johnson who appeared to come up with it in the end zone, then had it narrowly slip through his grasp once he hit the ground. This chance for the Orange would be the only time they came close to making it a ballgame.

Ian Book, the 3-star recruit who came into today leading country in completion percentage (74.5) showed no signs of rust after being sidelined last week with a rib injury. By halftime, the Irish lead 20-0 and the junior had 253 passing yards and a touchdown. Book said Dexter Williams, Notre Dame’s running back who had two scores on the day, was a huge part of their game plan.

“Getting the ball to Dexter any way we can is what we want to do,” Book said.

Book was able to find him once through the air, and leaned on him to open up the pass, as the NFL prospect ran for 5.7 yards per carry. If the Irish hadn’t settled for field goals in Syracuse territory three different times, the score would have been even more lopsided.

The whole afternoon the Orange couldn’t get anything going on offense, something Head Coach Dino Babers doesn’t necessarily attribute to being without Eric Dungey.

“I don’t know if that was that big of a blow,” Babers said. “There were a lot of mistakes, missed tackles, dropped balls, dropped touchdowns in the end zone.”

As for Eric Dungey, his coach said that he was unsure of the severity of Dungey’s injury and his status for next week at Boston College is unknown. Redshirt freshman Tommy DeVito did the best he could to fill the void, but it wasn’t enough. DeVito was 14 for 31 with no touchdowns and two interceptions on the day.

“Their defense played really well, you’ve got to give them props,” DeVito said. “It’s just a bunch of little things, we need put things together and get drives going to help the defense out.”

Notre Dame hung 36 points on the Syracuse defense, but perhaps it was because they were exhausted. The Irish held possession for 32 minutes in the game and the Orange had four three-and-out drives.

Next week, the Orange travel to Boston College to face the 20th ranked Eagles in a noon matchup on ESPN. For Coach Babers, he thinks the team needs to shape up in a hurry.

“We need to get back and regroup,” Babers said. “Get back to playing the football we’re used to playing.”